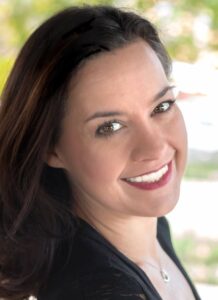 BECKY COOPER graduated in 1996 with a Dance Performance degree from Oklahoma City University. A dance instructor since 1989, Becky has been a master teacher in tap, jazz, and musical theater for conventions, workshops, and repertory intensives across the country and internationally. She has appeared in several musical productions throughout her pre-professional career, was featured in shows such as Annie, Gypsy, and The Sound of Music. During her college years, Becky performed various roles in OCU musicals alongside Kristin Chenoweth and Kelli O’Hara, was the first dancer and the first freshman to win Miss OCU, placed top 6 and won the talent competition in Miss Oklahoma, performed her tap solo at the American Legacy in Dance Awards honoring Peg Leg Bates, appeared on national TV in Ed McMahon’s Star Search. Becky also starred as CJ the DeeJay in Mickey’s Starland Show at Walt Disney World, where she sang and danced for thousands of children every day. She has danced professionally with Chicago Tap Theatre, Especially Tap Chicago, and was privileged to be a founding member of Billy Siegenfeld’s Jump Rhythm Jazz Project. Throughout the years, Becky’s competition choreography has been consistently acknowledged for its creativity, storytelling, and entertainment value. Her Chicagoland theatre choreography credits include Crazy For You (co-choreographer), My One and Only, Peter Pan, Guys and Dolls, Anything Goes, Children of Eden, Hairspray, Seussical Jr, Mary Poppins, Wizard of Oz, and Chicagoland holiday favorite Let It Be Christmas. In 2007, Dance Chicago honored her with the New Voice in Choreography award for her outstanding children’s work. Becky has a 21 year old son, a 13 year old daughter, and three grown up stepkids. She lives with her family in Wheaton, IL.